next blog post: Email vs. Push notifications: Which Will Get Your Message Across

One of the most common things in Android development is model creation. It is usually a three-step process that consists of:

There are some online tools that can boost your speed, but in the end, you are the one doing most of the labor. There is another way, though. You could be using GraphQL. All you need is a Schema file that you can get from the back-end department. In this tutorial, we will cover Apollo GraphQL. Another feature that we will introduce in this small project is Coroutines. They simplify your code that runs asynchronously. No need for long callbacks anymore. Thread safety is supported out of the box.

It also uses default interface methods that are only supported from API 24. To solve this issues, add Java version 8 as compiler. In build.gradle (app) add the following:

Next on the list are dependencies required to build project. GraphQL uses OkHttp client under the hood so we need to add that dependency as well.

At the top of the build.gradle (app) apply the plugin by writing down the following line

At the bottom of the build.gradle (app) add an extension

This allows us to use the Builder Pattern to make our requests easier to handle. In order to add the plugin to the project go to the build.gradle (Project) and insert the next line into the dependencies :

Do not forget to add a Network Permission into the Manifest file. When making requests, Apollo instance needs to be provided. In this case, Singleton pattern is preferred. I created a file called ApolloClient.kt and acquired Apollo instance within it. You can find the code here.

Now, to the GraphQL example. It’s very simple. An array of books. Each book contains a title and author name.

There is also a Query which takes a title as an argument. It is optional. If no title is provided, books are fetched without a filter.

Create a new folder “graphql” inside the “src/main” directory. 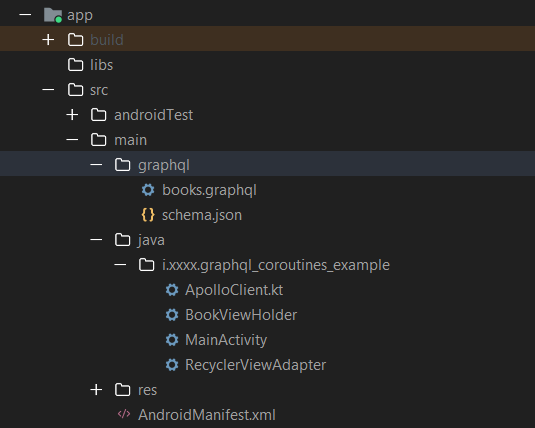 Grab an auto-generated schema file and place it within "graphql" directory. It should be in JSON format. If you don’t have it you can acquire it via the plugin helper. Run the following Gradle script provided by the plugin. Make sure that the back-end endpoint is accessible.

Then we need to create queries in order to generate models. In the same folder (“graphql”) create a new file with “.graphql” extension. Here is an example for books fetching

After query files are written, there is one more step to generate models. Use the terminal and execute the Gradle script in the projects directory

This will generate a class BooksQuery that should be used when making requests.

Next, let us set up the UI for our app. In the MainActivity’s XML file I created an EditText and Button. Data binding is enabled to write less code in Activity. You can find the XML here. I attached an onClick event called “getBooks” to the button and referenced the function from the MainActivity. When button is pressed, a network request is made.

When network request is done, results are displayed in the RecyclerView. RecyclerView item XML contains two TextViews: one for displaying book title and another one for author name. XML for item here.

In the project directory, we need to create two more files: Adapter for Recyclerview, and a ViewHolder for RecyclerView Item. What is important to notice is the model used for the ViewHolder is extracted from the auto generated BooksQuery class. In our example it would be BooksQuery.FindBook. Codes for the adapter and ViewHolder item here and here.

Back to the MainActivity. We need to declare some variables

Going from top to bottom:

Rember we referenced “getBooks” method from the XML. Let’s take a look at the rest of the code.

When “getBooks(...)” is called new Coroutine Scope is launched and function "makeSearchRequest(...)" is executed. As you can see, this function requires a suspend modifier as a coroutine must be called directly from the coroutine scope or suspend function. On the first line "apolloClient" runs the query method which uses a builder pattern to build prepare BooksQuery. Using the builder you can easily provide parameters. ToDeffered() converts ApolloCall to the Deffered which is basically a “Job” with the result. Then there’s a coroutine’s await() function that handles a job in async fashion and returns the result on the same line. After that, there is a usual RecyclerView adapter binding.

GraphQL and Coroutines are a really sweet spot for the developers. When comparing GraphQL integration to the REST, you are gaining a lot of speed. When comparing thread executing and default callbacks to coroutines, you get cleaner code. If you start using new technologies, you will write less code and make it more readable, which is always a preferred way of development. Github repo for the project can be found here. 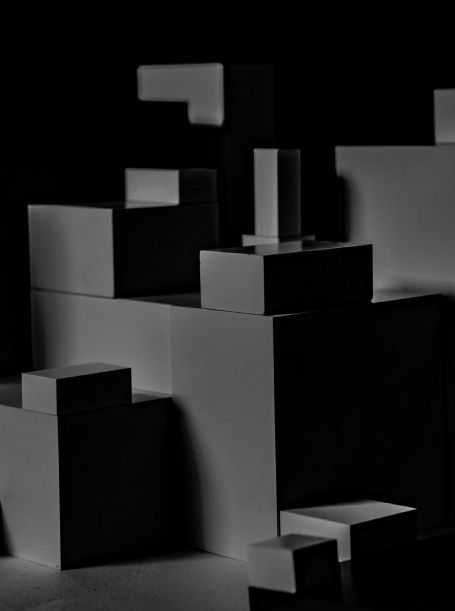 Reusing the ViewModel from the external Layout

Use the benefits of class inheritance

Reusing the ViewModel from the external Layout

If that is the case, always know that you can shoot us an email or give us a call, as we don't like leaving things in the air.